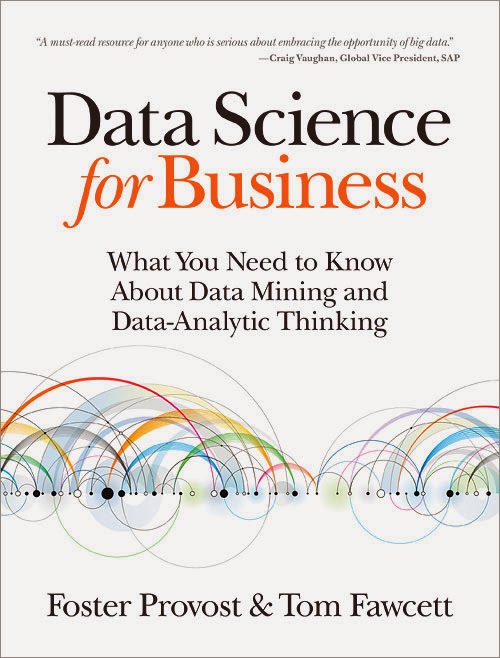 I recently read "Data Science for Business" by Foster Provost and Tom Fawcett for the upcoming Data Science Book Club that Nichole Elizabeth DeMeré is putting together. As the title suggests, it's pitched primarily at business people involved in data science projects.

For me, it covered some familiar territory I've encountered either via introductory courses or through work (e.g. hierarchical and k-means clustering, text processing, classifiers and lift curves), and some I hadn't (ROC curves, expected value in decision analysis; the latter of which I found really interesting in how it can help give a framework to problems).

With it being business-oriented, the emphasis throughout is definitely on how the data science process both relates to (the focus is on marketing and churn) and fits into business (for example, if you don't already have the right data to answer your question, is it worth you investing in doing so?)

The authors made a smart choice in starting from absolute basics, avoiding a lot of complexity in the algorithms and sticking to giving as simplified a view as possible of things while still retaining the core ideas. The coverage was enough that someone knowing nothing about data science could come away thinking of how they could start to consider applying it.

Even the sections marked as more complicated mathematically were usually a fairly straightforward read: you shouldn't struggle to get by even with very little maths training. I read it sequentially, but — final few chapters aside which pull together some of the ideas discussed — they're largely self-contained enough that it's easy to dive into selected parts.

A slight criticism that could have made the book feel more rounded for the non-developer or business reader was to show how data is actually processed. This was left a little abstract in the book. Results were shown, the process of how the algorithms give rise to the results was discussed, but what the user would do to actually get those results was skipped over. (They do include some interesting walkthroughs of the process of solving data science problems, just without the gritty details.)

I've a little experience of using scikit-learn and didn't find it hard to imagine how I could go about using the ideas that were being discussed. Without that, I might have found it a little more difficult to relate to otherwise.

A few mentions of Weka are made throughout the book: with it being open source and GUI-driven, it would have been ideal for a worked example of how to load and process data. However, it's a minor oversight; there are plenty of online tutorials for the interested and the authors have done a great job in communicating several, potentially intimidating, ideas with clarity.

It's pitched as a "broad, deep, but not-too-technical guide" which is a fair description. I'd definitely recommend it as an introductory book. A big chunk of it is available to preview on Google Books, if you want to check it out before buying.