Edit 2015-07-24: Slightly involved story aside, the version of uBlock linked here, by the original developer, is now uBlock Origin. I'd recommend searching for that version if installing as an extension.

It's available for both Firefox and Chrome/Chromium.

Edit 2015-05-18: The Chromium bug is fixed which should fix the uMatrix UI sluggishness, and uMatrix is finally available as a Firefox addon.

Edit 2015-01-09: HTTP Switchboard development is discontinued and has been replaced with uMatrix. The interface is largely unchanged. One problem at the time of writing is a Chromium bug which I think is the cause of the UI being really laggy to appear. Hopefully, this should be fixed soon.

After tinkering around with Adblock's filters to block some ads, I remembered that I'd read about an alternative to Adblock for Chromium-based browsers called HTTP Switchboard a few months ago and figured I should actually give it a try.

One of the reasons that HTTP Switchboard was notable is that it promised to be much more CPU and memory friendly than Adblock Plus currently is.

In fact, the adblocking part of HTTP Switchboard has now been separated out into another project, ublock. Both are still useful. I'll explain why below.

Many content-driven websites use advertising as their business model. My feeling is that, while sites are welcome to try and send content to my browser, I should have the freedom to choose what my browser actually loads.

There's no contract I've signed that states I must load and display the page as the site owner intends. (What if I'm using a text browser like links?) And there's no obligation on my part to make their business model sustainable.

Maybe you still think this seems selfish. Well, to some extent it is. But, my privacy and computer security are more important to me than the financial success or failure of an external organisation. That I put my priorities in this order is kind of obvious though, right?

Why shouldn't sites and advertisers worry so much?

Even with "despicable" users like me, there are two reasons I can think of as to why advertisers and sites dependent on them shouldn't feel so glum:

But why worry about where displayed web content originates from?

As this Economist article highlights, the depth of what advertisers collect about your browsing habits is extensive, and it's handled and passed around by many organisations. Unless you're all for being advertised at, this isn't for your benefit.

Maybe advertisers are really all benign and just interested in deciding who's best to try to sell to. Perhaps just as the executive in that article quoted claims, it really is just that,

"We are not trolling for personal information. We are trying to figure out if you are a high-value customer and are in the market for a car."

But, the sheer amount of information being collected is worrying, especially when, as a user, I've no idea of what's actually being tracked and what the intended end use is.

As well as that, web advertising has been a conduit for the deployment of malware previously and will no doubt continue to be. (It's a nice way of distributing it to users who are visiting, what to them, might seem like a trustworthy site. If they can get the malicious ad past the company providing the advertising, they don't need to go to the trouble of hacking the site directly.)

There have been one or two high-profile incidents this year too.

In terms of potentially malicious content, it's not only just ad providers that I'm concerned with, but allowing large numbers of arbitrary sites to run their scripts on your machine unchecked.

Look at the recent JQuery compromise, for instance. Fortunately, only the site itself was affected and not the hosted libraries that many sites. It's not inconceivable that an attacker may well deliberately go after to poison hosted libraries. It's just way too big a jackpot for malware distributors to ignore.

Even if such an attack might be spotted quite quickly, how many users could be affected in the interim? (I'm not even sure what the solution is here; often JQuery's needed for sites to function as intended…)

Minimising the number of third-party sites that you allow content to load from can't be a bad thing. (There's some risk wherever you go, but in some cases, I've seen sites loading in content from more sites than I can count on both hands.)

Controlling what your browser displays

So, what can you do? There are browser extensions for Firefox and Chrome that give you more control over what your browser loads.

Lots of sites are perfectly readable without them storing tracking information about you, without arbitrary JavaScript running. For those that don't, it's quite simple to whitelist them.

The downside of this is that it can be a chore. In Firefox, I need a slew of extensions to do this: which sites are allowed to run scripts (NoScript), which cross-site requests are allowed (RequestPolicy), and which sites can store cookies (CookieMonster).

Managing each one in turn, allowing permissions for cookies, scripts and third-party scripts, can be tedious. I've run NoScript for a long time, but these days with sites often hosting content and scripts somewhere other than on the domain you're visiting, it's much more work than it was.

HTTP Switchboard was a big, all encompassing project for Chromium-based browsers that had features comparable to Adblock Plus, and the Firefox extensions, NoScript, RequestPolicy. Recently, the adblocking, pattern-based filtering has been split out into another project, ublock.

By virtue of what HTTP Switchboard aims to do — give you full control of what is allowed by your browser — this makes its user interface slightly more complex, which I'll soon get onto. 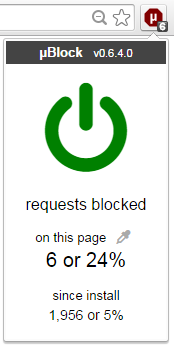 Stripping out this sophistication seems like a smart move, since ublock's incredibly easy to use. Really, it requires the same amount of setup as Adblock Plus does: not much at all.

It comes with the most popular Adblock Plus filters accessible on install, and you can easily choose which of those filter lists are applied.

Disabling ublock for a site is also straightforward. Click the red µ icon next to the address bar and then click the power icon.

It does the same job as Adblock Plus, but with lower CPU and memory usage. If you've ditched an ad blocker for this reason, it's worth looking at. Even if you're still happy using Adblock Plus (or one of its forks), ublock is definitely worth spending the couple of minutes to try it out.

On to HTTP Switchboard, which allows fine grained control of the types and locations of content that Chromium-based browser can access.

Note that with the current version of HTTP Switchboard, there's a little initial setup to disable the adblocking filtering that uBlock covers.

HTTP Switchboard's interface can feel initially overwhelming; more so than perhaps the likes of NoScript, RequestPolicy and CookieMonster that I use which all have similar menus to allow or deny permission for a site to run scripts or store cookies. These have a text explanation of what the option does.

The problem with this menu format is, though it's explicit and clear, it's cumbersome when you're dealing with several extensions. For each extension, you need to repeat the process of whitelisting every site that you're allowing.

When you've actually used HTTP Switchboard for a few minutes, its simplicity clicks. HTTP Switchboard opts for a table-like interface. Each site is represented as a row, and each type of content is shown as a column.

This lets the user approve different permissions for different sites quickly. Just read down the list of sites, click on those you want to whitelist completely, and for those you don't you can allow specific features only (e.g. loading images only). Likewise, if you want to enable one type of content for all sites, just click the appropriate column. If you want to save the permissions in future, click the padlock icon, and you're done.

It helps a lot that you can see all the sites that are trying to load content or save cookies in one glance, rather than consulting separate menus.

There's an autoreload option that refreshes the page when you change permissions, so once you've approved everything needed, the page should then work as expected.

Out of the box, (I think) HTTP Switchboard was configured to allow most requests through, apart from those blacklisted by filters. What initially confused me was at what level the filters apply. (Do they apply to this site? To this domain? globally?).

What I'd recommend is, like the extension developer, is to block everything by default and then whitelist only what you want to allow.

There's an option in the HTTP Switchboard settings under "more security" to create a new site-specific scope for every site you visit which is really useful. This creates a set of rules for each site you visit. Furthermore, the drop down (click the blue top-left box with the site name in) lets you select where the rule applies (to the site, to the domain or globally).

It also has some nice bonus privacy features, like removing HTTP referers when visiting non-whitelisted sites and a user-agent randomiser.

The only thing that's missing for me is guidance on what the sites likely are. If you're happy to spend a few seconds researching, it's not hard to figure this out. It might save a bit of time if there was a database of sites telling you "hey, you might need this, it's a content delivery network" or "this is tracking how you're using the site; you probably don't need it for the site to function properly". Yes, I can search, but it's a bit clunky to do that.

These are really great browser extensions, and credit to Raymond Hill for an awesome job on them. Every time I'm managing permissions with multiple extensions in Firefox now, I sigh a little. (Firefox's awesome bar is far more useful to me than Chrome/ium's omnibox though, so I tend to stick with Firefox.)

Longer term, I'd really hope that a Firefox add-on developer picks up the baton to port these.

(As a postscript, I should point out that as well as adblocking and control over requests, HTTPS Everywhere is another useful privacy-enhancing extension for Firefox and Chromium browsers. Where HTTPS browsing is available on sites but not always used, HTTPS Everywhere enables it for you.)